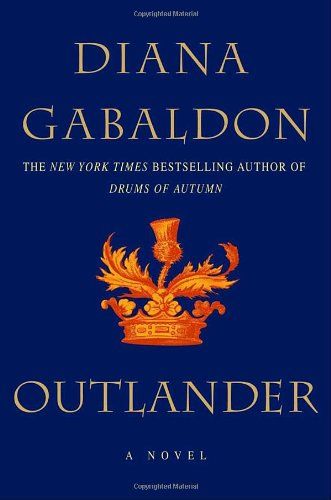 Synopsis (Goodreads): The year is 1945. Claire Randall, a former combat nurse, is just back from the war and reunited with her husband on a second honeymoon when she walks through a standing stone in one of the ancient circles that dot the British Isles. Suddenly she is a Sassenach—an “outlander”—in a Scotland torn by war and raiding border clans in the year of Our Lord…1743.

Hurled back in time by forces she cannot understand, Claire is catapulted into the intrigues of lairds and spies that may threaten her life, and shatter her heart. For here James Fraser, a gallant young Scots warrior, shows her a love so absolute that Claire becomes a woman torn between fidelity and desire—and between two vastly different men in two irreconcilable lives.

It’s precisely when I read books like this that I realize why review lists like the New York Times Bestseller List and ratings sites like Goodreads need to be considered alongside a bucket of salt (a pinch just doesn’t cut it).

The book is classified as a historical multi-genre (which appealed to me) and it clocked a 4.2 average rating on Goodreads, so I thought to myself, how bad can it get? As it turns out, pretty damn awful. God knows how, but I finished reading this – all 892 pages of the more-often-than-not cringe worthy trash it was. It did get me thinking that maybe, just maybe, life is too short to stick to my always finish a book I start rule…

I’ve read enough books to realize that I won’t always love what I read, but this is one of those books that I disliked so much I actually wished the rating system extended to less than 1 star.

The writing started to bug me almost from the beginning but I decided to persist because of the potential I thought the plot had.

Then Claire started to annoy me and she carried on annoying me through the rest of the book – I don’t think I have ever come across a lead female character in a novel that I find as irritating, selfish, boring and flat as her – her reactions to being thrown back in time, almost raped, forcibly married, beaten had me thinking “Really? Really?! REALLY?!!!” for most of the book.

Jamie as a lead male character. Boring. No other word for it.

The love story between Jamie and Claire (who, in my opinion, forgot her ‘beloved’ present-day husband and accepted her fate far too quickly and easily) lacked depth and seemed to be based on lust, rape and violence rather than anything of substance.

Unrealistic love story aside, the book also seems to lose the plot (pun intended) – after Claire gets transported back in time, the next 700+ pages meander almost aimlessly. That someone thought highly enough of this book to option it for, and turn it into a TV series as well…is there any limit to human stupidity?