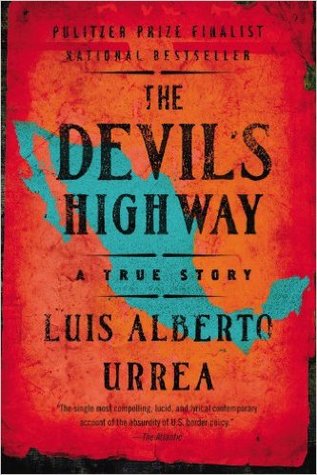 Synopsis (Goodreads): The author of “Across the Wire” offers brilliant investigative reporting of what went wrong when, in May 2001, a group of 26 men attempted to cross the Mexican border into the desert of southern Arizona. Only 12 men came back out.

While I’ve read a lot of good books lately, there hasn’t been anything that’s inspired me to write a review (which I realise is not necessarily a good thing if I want this site to start getting more hits).

I picked up Luis Alberto Urrea’s book mainly because I needed to find an author that enabled me to fulfill my “U” requirement for this year’s reading challenge, and in one of those providential twists of fate, it turned out to be a book that was beautifully written, thought-provoking and packed a powerful emotional punch.

The book tells the story of the ‘Yuma 14’ who died while trying to cross into the United States from Mexico in 2001 through a vast stretch of desert. Whilst I previously knew nothing about this tragedy, there have always been controversies around immigration and President Donald Trump’s ongoing rhetoric about building a wall between the US and Mexico shows that a sustainable and humane solution to the problem is no closer to being reached.

Urrea does a wonderful, relatively unbiased job at getting into the minds of all involved parties, telling the story of the 14 men who perished, and the 12 who survived, the smugglers (Coyotes) who exploit the disenfranchised and desperate men looking to improve the lives of their families by charging extortionate fees to guide them across the border, and the often villanised and misrepresented Border Patrol.

While even the author admits to an initial bias against the Border Patrol (the ‘Migra’), he owns after his investigations and interactions with them that while they enforce Federal Policy and mind the US borders, they will more often than not do everything in their power to rescue and help the walkers that get lost in the desert and ensure they survive.

In his discussions with schools and other groups around the country, the author was asked by students why they should bother reading books about ‘illegals’. To me, just the use of that term highlights why this book, rightly so, is increasingly mandated reading in American schools. It is of vital importance to be aware of, and understand what drives the men and women who would risk their very lives to cross over into the ‘promised land’ that is the US…things that may seem small to those who have grown up in a relative life of privilege, like a cement house for their family, or furniture for a pregnant wife.

The most heart-breaking thing about the harrowing story of the Yuma 14 is that this is not a one-off occurrence, but something that happens all the time. Before it used to be mostly men, but now there are increasing numbers of women and children, and the things they go through are often to difficult to even think about.

This is investigative journalism that also reads like the best kind of fiction – a harrowing story told masterfully to illustrate the complexities surrounding border crossings and their consequences. Essential reading.