I braced my feet against the wall, hanging on to the rope with one hand while the other tried to flick off a newly discovered leech from my wrist. It was probably at this point that I started to wonder what exactly I had gotten myself into.

The “what”, to be more specific, was the Hang Son Doong expedition I had signed us up for. Local man Ho Khanh first stumbled upon the Son Doong Cave, in the heart of Vietnam’s Phong Nha Ke Bang National Park in 1990, but he decided to move on without exploring it at the time only to forget its exact location. It was only rediscovered by him in 2008 and explored in 2009 for the first time by the British Cave Research Association. The first expedition was stopped by an 80m high calcite barrier, dubbed The Great Wall of Vietnam, and only after the second expedition in 2010 when this barrier was climbed and the end of the passage found was Hang Son Doong determined to be the largest cave in the world with a total measured volume of 38.5 million cubic metres. Son Doong is over 5km long with sections that are up to 200m tall and 150m, described as being large enough to house an entire New York City block, complete with skyscrapers.

Photo: The depths of Son Doong

The online bookings portal opened at 8:00am Hanoi time, so 4:00am Nairobi time. Armed with our passport details, I rubbed the sleep from my eyes and started on the lengthy application forms. Yes, you read correctly – application forms. Oxalis, the sole-authorised operator requires a comprehensive questionnaire to be filled in with specific details required on health and fitness as well as outdoor and hiking experience, which they then review before confirming your spots (places on this trip are like gold dust given there is one operator running only 1-2 trips per week, and only from February to August each year). Also, given how intensely physical I found the expedition (and I would say I am pretty fit), in hindsight I totally understand why they warn you that if you’re not able to make it to the entrance of Hang Son Doong, Oxalis reserves the right to turn you back.

The trek was preceded by a comprehensive safety briefing the day before we set off and on the first day our group of 10 made our way to the trailhead with the guides and we started off with a steep downhill section through dense forest for the initial leg of the hike, heading for the minority village of Ban Doong. After a picnic lunch and a short tour through the village, we carried on through the valley, along and across the river with the afternoon sun beating down on us (thank goodness for all those river crossings) to the entrance of the Hang En cave, third largest cave in the world, home to thousands of swifts, and our first campsite. 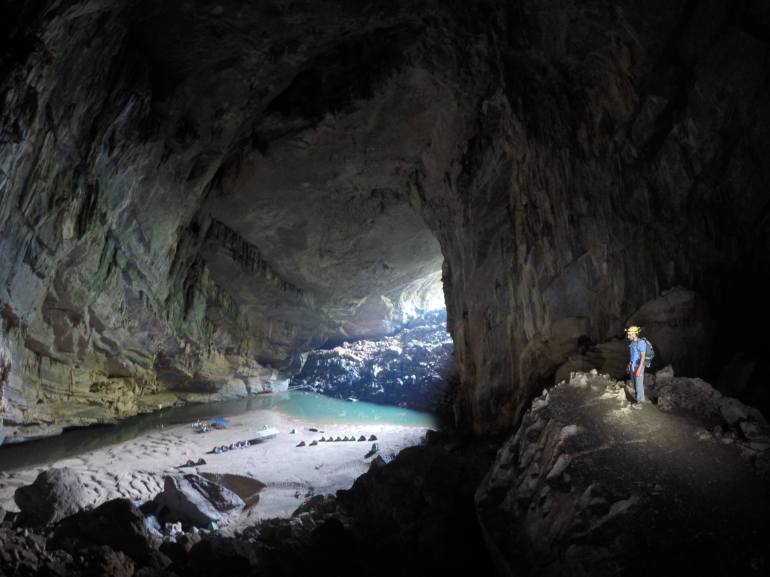 After putting on the helmets and headlights with which we became very well acquainted with over the next few days, we hiked/bouldered down to the first campsite, where we got the opportunity for a well-deserved swim in the underground river. Our camp routine was quickly established – the porter team had already set up tents and the dining area. After grabbing our individual bags, we settled into the tents, dried out clothes and shoes, and then congregated round the dining table for coffee and tea and whiling away the time until dinner, which turned out to be a veritable Vietnamese feast of 2-3 meat dishes, sautéed vegetables, chips and rice (definitely no dieting on this trip!).

Being an early bird, I was usually out of the tent by 6am, having coffee with a few other early risers while we waited for the rest of the guests to wake up for breakfast. After a breakfast for champions, Pho, we made our way out of the Hang En campsite by bouldering/climbing up out of the campsite and then hiking through the Hang En Cave and out into the river valley beyond. During the pre-trip briefing (during which we also found out we were the first Kenyans to ever go through Son Doong…hurray, but no flag!!), we were warned that we would most likely find day 2 the toughest because it was the most technical, especially for those with no climbing or caving experience, or if you had a poor sense of balance (I checked all three boxes!). The next couple of hours or so were spent walking downstream through the river (we had by then resigned ourselves to the fact that we were going to be damp from head to toe over the next few days) and then up a steep path to get to our lunch spot where we were also briefed for the descent into the Son Doong Cave and fitted with safety harnesses. 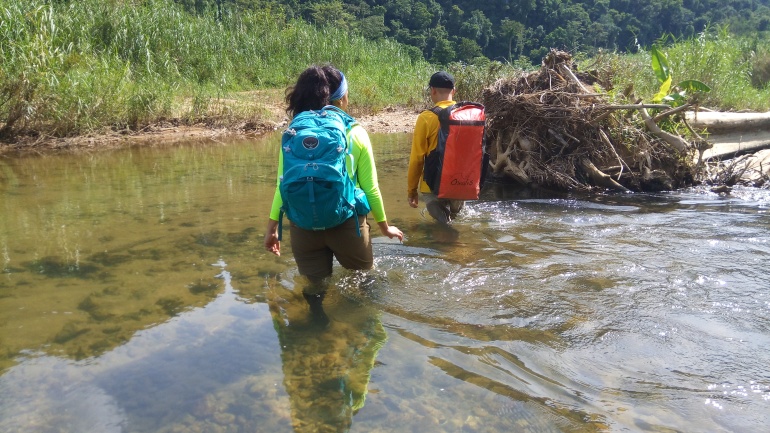 A short, sharp descent after lunch brought us to the entrance of Son Doong…we were lucky enough to get relative calm in the opening to the cave while we waited for our awesome assistant guides to set up the belay lines and position themselves at key points along the 80m descent into Son Doong (there were stories of strong, freezing winds blowing out of the mouth of the cave, causing people to curl up and shiver while waiting to descend!). Picture an 80m climbing descent down steep and slippery rock into pitch-black darkness, where you can’t see anything below your feet or the little circle of light your headlamp throws out, throw in the odd leech – and you can see why it’s pretty scary stuff, so let’s pause while I give myself, and Rahim who isn’t a fan of heights, a pat on the back here.

Photo: Rahim being unclipped from the safety line on the descent into Son Doong

After everyone had safely descended, we walked on, tackling a couple of waist-to-chest high (depending on your height) underground river crossings en-route, of which at the second one more than a few people take the opportunity to wash before we walked and scrambled our way through the largest part of the cave to the point where we got our first epic view of the Hand of Dog and daylight streaming through the first doline (created where cave passages collapse in case you’re as lost as I first was when I heard that term). After stopping for more than a few photography opportunities, we made our way towards the base of the first doline where Camp 1 had been set up.

Photo: Hand of Dog (or, for me, man with fringe and big nose!)

Day 3, best described as the day of epic views, had also been described as an easier day (with relatively dry feet…yay!), but I think the caver definition of easy is like the Mt Kenya porter version of “iko hapa tu!”…i.e., not in the least accurate. Straight out of camp after breakfast, we scrambled down and across some steep and rocky sections (very tight in places) before emerging into the light beams and magic of the first doline where we stopped for lunch.

After a short break and some more yummy Trung Nguyen coffee, we walked deeper into the cave, home of huge stalactite and stalagmite formations, cave pearls, and a white fish species unique to the cave. A short raft ride, with our ever-industrious guides paddling away (we got the luxury option instead of paddling our own boats), took us to the base of the Great Wall of Vietnam and the future exit point for Son Doong trips now that they have the ladder in place.

As if being in the world’s largest cave wasn’t exciting enough, during the course of the evening at Camp 2 a shout from one of the porters alerted us to the presence of a 6 foot long snake making its way through the campsite, and alarmingly headed towards one of the tents that hadn’t been zipped up properly! From the excitement amongst the porters, we could see this wasn’t a regular occurrence (thank God!), but nonetheless, after the snake had been dealt with, pretty much everyone went to double check their tents were zipped up!

On the fourth day, we retraced our steps back through the cave, stopping at the first campsite for lunch before heading back to the Hang En campsite – although the longest of days in terms of distance covered, it wasn’t as difficult as expected, probably because of muscle memory and the familiarity of the route. At one point however, when we were climbing up the 80m to the entrance of Son Doong, my muscles just failed on me – they knew what they had to do…I just couldn’t summon the energy to coordinate the necessary muscles! No matter – a couple of minutes just ‘hanging out’ gave me enough of a boost to haul myself out.

Day 5 involved a further retracing of steps through the river and along the valley floor before a short steep climb up to the road….and we were done! The first Kenyans to go through (and conquer) Hang Son Doong in a once-in-a-lifetime amazing experience…although these are the things people don’t tell you (or they do in a really sneaky under-stated manner) 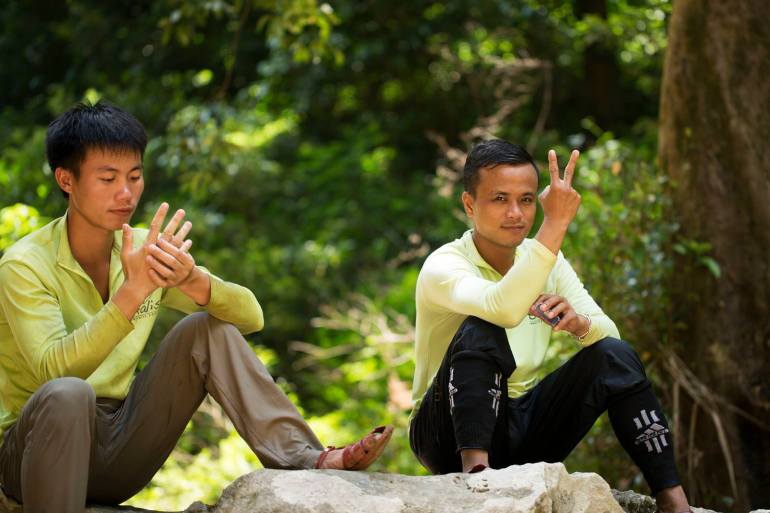 Photo: Two of our assistant guides, Bien and Dang