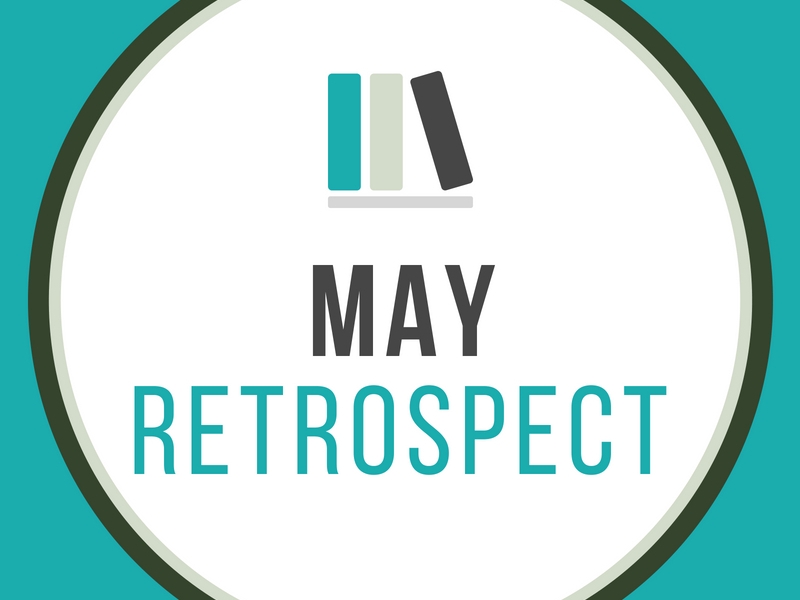 May started intense with reading the second and third in the Red Queen series – let’s just say I became even more anti-social whenever I had one of these books in hand. I haven’t been this addicted to a young adult series since The Hunger Games. I love the dystopian world Victoria Aveyard has created and the rebellion it gives rise to, the darkness of Maven’s character and who doesn’t love a good love-triangle?! Even though I occasionally (okay, more than occasionally) just want to shake Cal into making an honest to god choice, there are enough twists and turns in the plot to keep you reading long past your bedtime. I hardly ever pre-order books but after blitzing through both Glass Sword and King’s Cage, I went right out and pre-ordered War Storm ahead of its release on 15 May.

I wrapped up listening to Uncommon Type at the beginning of the month and I’d definitely say it was worth a listen (or read). Written and narrated by Tom Hanks, it’s a quirky selection of short stories that evoked a sense of nostalgia. One of the big publicity angles around this book was love of the typewriter (hence the title of the book), with Tom Hanks having typed up this collection on one, and you can see this love coming through in the stories themselves. One of my favourite lines from one particular short story set around a typewriter was:

“Make the machine part of your life. A part of your day. Do not use it a few times, then need room on the table and close it back into its case to sit on a shelf in the back of a closet. Do that and you may never write with it again.”

Anything is Possible by Elizabeth Strout is just good old fashioned storytelling. I picked this one up after my Red Queen blitz when I needed something a little more mellow and it hit the spot. It was a beautifully written series of interconnected short stories set around the inhabitants of Amgash, a little town in Illinois. Wonderful prose and characters.

Sometimes the life of an author is even more fascinating than what they write, and this was definitely the case with Their Eyes Were Watching God. Zora Neale Hurston was a writer ahead of her time, her philosophical and feminist voice stifled by contemporaries who were probably terrified by her different way of thinking. First published in 1937, this book went out of print and was forgotten for over 30 years before she was rediscovered through the efforts of contemporaries like Alice Walker, and following a revival of interest in the works of African-American authors. And she wrote this book in 7 weeks. And she died in poverty and obscurity. All of this aside, her creation, Janie Crawford, is a force unto herself. Her search for love and her true self as a woman in a man’s world, and as mulatto in a white world, is courageous and inspirational. One of my favourite reads from May.

The Silk Roads by Peter Frankopan was an absorbing but densely written history of the world that was refreshingly non-Western centric. It took a while to plug through this one because it was best read (and digested) in small doses.

Kinder Than Solitude was another May favourite with its poetic prose and enigmatic characters – the full review can be accessed here.

The Tin Ring was a book I had picked up on Amazon after I visited Prague and Vienna a couple of years ago. This memoir documents the experiences of the author after she was separated from her love Arno during the second World War and went from Terezin through Auschwitz and Kurzbach to Bergen–Belsen. I’m a little conflicted about this one. As far as World War II / Holocaust memoirs go, there are definitely better written (and known) examples out there – considering the very nature of her experiences, the author’s tone was a little too detached and flat for me, but given the horrors that she alone of her family survived, I don’t think I could really blame her (or it could just be a case of lost in translation). It was still a thought-provoking look into how the survivors got through the horrors of the concentration camps and into the ability of the human spirit to look for light even in the darkest of times.

I’ve also been listening to the Harry Potter audiobooks as I work on finishing my jigsaw puzzle where I am more than 25% through, and while the books themselves will always be beloved, having been read and re-read every couple of years, I have to admit Stephen Fry does a stellar job narrating them. Having blitzed through the first 3 in the series, I am currently listening to Goblet of Fire and loving it. I don’t know how much I should be worrying about the fact that all the things I currently love doing – reading, writing, colouring, puzzling, and running – are making me very, very recluse-like!